My true conversion story, retold as if it were an illustrated epic sci-fi novella: 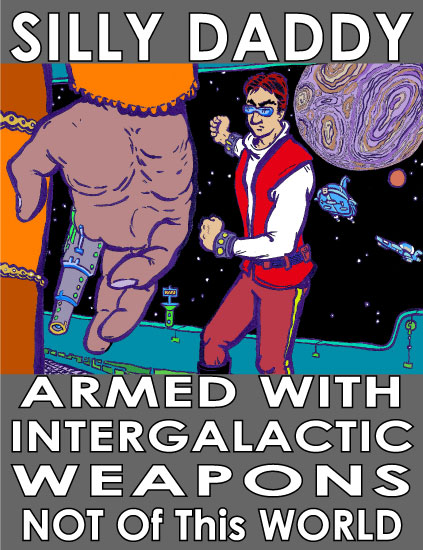 This is my autobiographical science fiction story of how a space boy becomes a fighter and an artist--on the wrong and right sides in the galactic battle between good and evil. As a two-fisted comic book artist on the way to becoming a creative super star wars against society, he increasingly questions why his career keeps destroying his close relationships. Will this young man of violence turn into a full-fledged killer, or will he reform his life and join an intergalactic movement to change the universe? As space colonization advances to distant planets, the roles of family and faith become more and more estranged in this sci-fi tale of redemption. Welcome to the out-of-this-world conversion of award winning virtual cartoonist, Joe Chiappetta (Silly Daddy). Contains 13,300 words with 42 illustrations.

Armed with Intergalactic Weapons is an original scifi story by Joe Chiappetta. It takes place in the Silly Daddy universe of an imaginary future, yet contains true accounts, slightly altered to fit into a science fiction setting. I've been working on the novel off and on for the past 12 years. While the book is not a sequel to the "Star Chosen" sci-fi novel, there are a few overlapping plot elements that the sci-fi loving fan will find intriguing. In fact, some might even call this new autobiographical science fiction book a pre-prequel to Star Chosen.

For those that aren't familiar, "Autobiographical Science Fiction," as I am sure you could have guessed, is a sub-genre of Science Fiction, and an offshoot of Autobiography. It's basically true-to-life accounts of the author's life, but remixed into a sci-fi setting. Basically I took my life story (thus far) and rewrote it as if I had lived in the future within a science fiction timeline. All my life events, feelings, and thoughts that happened in this story are completely accurate, yet set in a sci-fi universe. So I would define autobiographical science fiction as a true life story written by an author about him or herself, yet set in a futuristic or technologically altered universe.

Read a short excerpt from this science fiction eBook:


Armed With Intergalactic Weapons Not Of This World:

I am one day old. 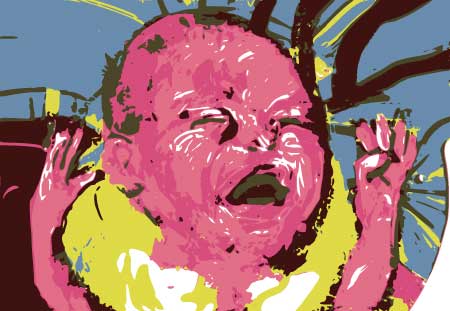 My dad sees me for the first time through the hallway window of the maternity ward at Chicago Spaceport Hospital. This is my father's second child, but his very first son.

"Sons born in space are statistically more restless than sons born on the planets," says the medical robot to my dad. "Therefore, remember to instill discipline into your child. Statistics also show that eighty-four percent of..." 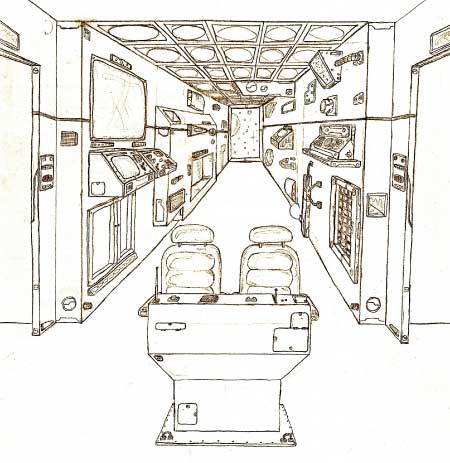 From a sterile corridor bursting with hi-tech medical equipment, my father interrupts, "Thanks Doc Tinhead. I'm going to see my kid now."

After taking a good look at me, my father turns to my grandfather and says with a proud smile, "It looks like my son boxed ten rounds with prizefighter Rocky Marciano... and lost!"

The reference to my slightly crooked nose combined with mention of the greatest ancient Italian-American boxer of all time is a good thing. It's a sign of parental approval, and big aspirations. From day one, as the hovering robot nurses clean the birthing fluids off of me, it seems to be decided; Joe Chiappetta is a fighter.

I am five years old. 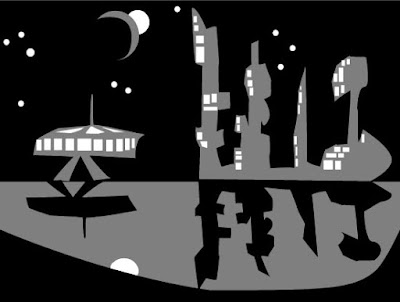 Welcome to the Borwyn, a densely populated, but usually peaceful planet. The floor of our apartment pod is covered with holographic pictures of superheroes. The green shag carpet is bursting with the most colorful heroic poses that twenty-five credits can buy.

I have downloaded the superhero images from the beginnings of my comic eBook collection and projected all the characters out onto the carpeted living room floor. You can barely walk in here without stepping through one of these full color 3D heroes: Moon-Spider Man, Subspace Mariner, Byte-Man, Super-Robo Man, Captain Earthica, the Fantastic Fandroids, the Bio-Hulk, Astro-Thor, and Waffle-Iron Man. It is such a brilliant sight. 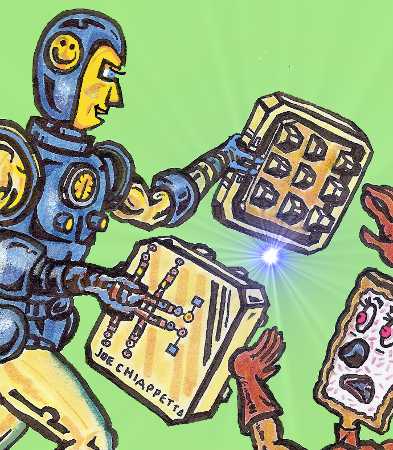 All my heroes... they almost come alive, fighting for what is right. They save the universe and oppose the forces of evil on a daily basis, most of them with intergalactic weapons not of this world. A thought occurs to me; "That is what I want to do."

As the years go by, and human colonization of space marches on, I will be stirring up a recurring question with an elusive answer; "How did everything change? I was supposed to be a hero."

I am eleven years old.

My family has relocated to Planet Roadview. The planet is not much different then neighboring Borwyn. But on Roadview, the virtual school district is a little better. At least that's what the search engines say. 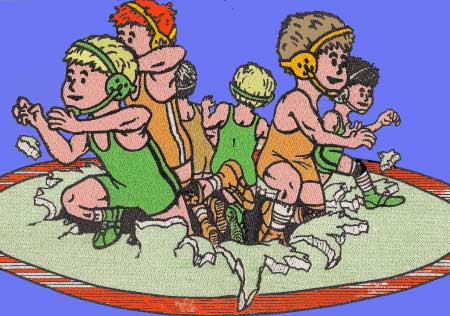 Many skills have I acquired to draw the super heroes I have admired for ages. However, drawing superheroes isn't actually the most action-packed thing for a young boy to do. My dad even reads me a report about the future of artists. It says that soon, people with no talent at all may be able to be fitted with implants to give them various skills. "So don't focus on art, Joey," says my dad, "because soon, everyone will be able to do that easily. Besides, a kid needs to be active, and tough."

Therefore, my dad enrolls me in the Comet-Cats Wrestling Club. We practice three or four nights a week, and mind you, this isn't easy virtual T-ball kid stuff. Our practices are physically demanding. The whole team goes home exhausted after every practice. It's one of the few sports on the planet that is still physical, not virtual.

Furthermore, this means that I can't participate in Battlestar Fantastica--the greatest space opera interactive movie series a boy could ever imagine! Only on Wednesday nights is this show on for free. All other nights, you have to pay. Therefore, every Wednesday evening, on the way to wrestling practice, I sigh and rationalize in my mind, "Becoming good or even great at something is not easy. It sure takes sacrifice. Is being able to throw another guy down to the ground nine different ways... Is that worth me not being able to watch guys in spaceships battle evil robots online?"

For now, that deep question goes unanswered, and I miss all the best free interactive shows of my formative years. They all seem to fall on a night when we have wrestling practice. However, I do become a lean, mean, fighting machine, qualifying for the State Tournament on Satellite Cicero three years in a row. I have big muscles, trophies, and a buzz cut to show for it.

My childhood becomes stamped with competitive and unforgettable statements from my dad; "When you take someone down in a headlock, Joey, don't just take them down like you're a ballerina. Make sure they remember you--make it painful, with a little knuckle in the side, or a chin in the back. Win or lose, your opponent will think twice about ever going up against you." 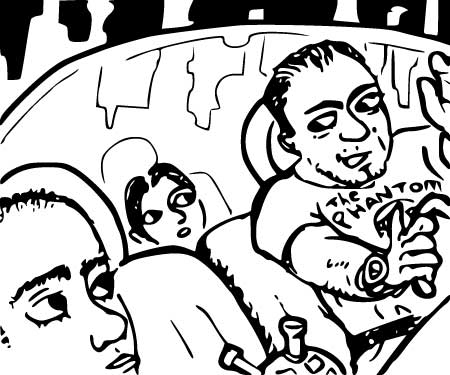 My grappling success comes as no surprise. Between my dad, an ancient karate black belt, and my cousin, the smartest coach in the galaxy, plus their friend, DeeDee, the most charismatic and hard working robotic coach ever, I am poised for success. In fact, everyone these three coaches train becomes a formidable fighter, on and off the mat.

Nevertheless, by the middle of virtual high school, I start to burn out. I can beat most of my opponents, but so what? It's not like I'm fighting super villains or space pirates.

What's the point? Was wrestling success really worth giving up Battlestar Fantastica? Will I ever find out why those evil robots hate humans so much? Oh, what's the point of anything?

Walking away from the wrestling mat for the last time, with sore knees and a bad back, I begin to nurse a deadly combination of three character traits; I am tough, bitter, and ungrateful. Conclusively, I make a decision; "The next time I decide to fight for something, it had better be worth it!"