Silly Daddy Coins His Own Money 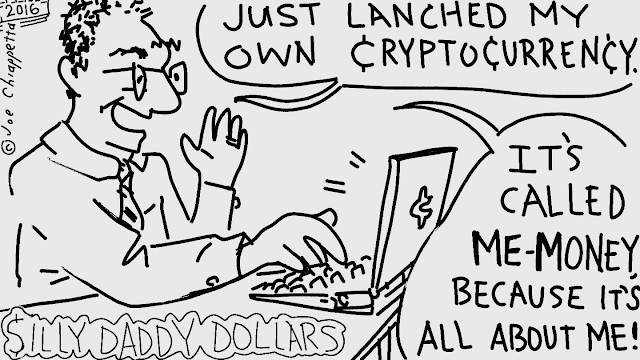 I have been studying economics and the digital transformation of money lately and have some not-so-serious thoughts (like the above Me-Money comic) and some serious thoughts below.

If a central bank ever decides to compete with bitcoin (which is a decentralized global currency and not government controlled), and that central bank starts to issue its own cryptocurrency, here are the some of the potential positive and negative impacts of such a venture:

Positive Impact to the government and central bank:
1. More control
2. Ability to run pilot program(s) first in smaller environment to work out unexpected issues
3. Can take as long as it likes to roll out the system
4. Can end the cryptocurrency at any time
5. Can pressure and incentivize other nations and companies to use the currency
6. Can make tax filing system automatic
7. Easier to collect fines from lawbreakers
8. Can issue more currency whenever it likes
9. Easier to track spending patterns and activities of citizens
10. Worldwide media exposure and attention
11. Viewed as innovative and forward thinking

Negative Impact to the government and central bank:
1. Central bank and government are at the discretion of fallible humans who can become very disunified, change the rules, have hidden agendas, and make poor decisions about ongoing operations
2. System will be always pressured by politicians, special interest groups and businesses serving selfish interests
3. Increased exposure to cyber crimes and online theft
4. System is totally dependent upon electricity and the internet. If either system ever goes down, the economy stops.

Negative Impact to individuals:
1. Those holding bitcoin or other altcoins would see those coins and infrastructure devalued and in decline
2. People without great internet service would be excluded from full participation
3. Increased exposure to cyber theft since more transactions move online
4. Higher unemployment for bank tellers and brick and mortar retail bankers

That said, I'm not saying a central bank or government should or should not issue its own cryptocurrency. I really don't know if it would be good or not. There are so many variables that only God knows how such an economic transition would turn out. Besides, I have no authority in this matter. My prayer is that, however we use money, we do it to honor God.
Labels: economics, essay, funny, social commentary, Webcomics
Newer Post Older Post Home