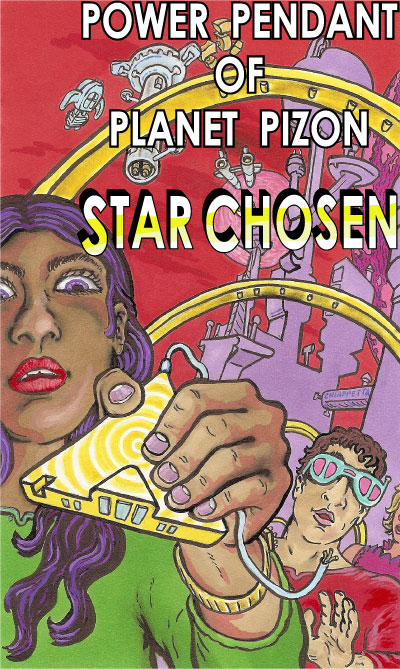 Family friendly science fiction with plenty of action and a positive message!
The Star Chosen are caught in a deadly struggle over a mysterious power pendant that may be the only thing standing between them and certain vaporization. When control over this otherworldly pendant gets called into controversy, a young romance on Planet Pizon turns into a fatal battle involving laser guns, spaceships, and ex-boyfriends.

Will the Star Chosen squander the pendant's amazing abilities in a thirst for revenge, or will they learn to trust God and forgive in a time of mourning? Find out in this sci-fi space opera by award winning author Joe Chiappetta. Novelette contains 10,000 words.
Order eBook from Amazon for Kindle.

Free sci-fi online: Read the first 4 chapters below as a free book preview.


Chapter 1: A Gift from the Deep Space Mining Vessel

From the spaceport, anyone could feel the ever so slight vibrations coming from the antigravity drives on the largest ships as they came and went. Such was the case with the approaching deep space mining ship that Pamma was viewing. The bulky, awkward vessel glided smoothly into Planet Pizon Spaceport just as scheduled. No amount of fancy decorations could change the fact that this incoming mining ship was ugly and grimy--perhaps the ugliest craft ever imagined. As the vessel made its textbook docking procedure into the port, this was Pamma's primary thought as she peered out the giant window of the spaceport terminal, waiting reluctantly for one of its passengers.
Pamma's dark, lovely, purple eyes were blinking rapidly as she let her mind dwell on trivial matters to pass the time. "Whoever designed this mining ship clearly had no concern for aesthetics," she pondered. "It looks as if someone took massive blocks, randomly assembled them, sat on them, kicked them, and then rolled them in the mud oceans of our nearest moon. It's a wonder this vessel even gets off the ground. That ship is about as ugly as my old life."
Pamma would know. She had recently made a list of all the bad things she had done in her twenty-two years. It was a surprisingly long and even repulsive collection of shameful deeds.
Much of what was on the list consisted of things she had done in virtual reality scenarios. However, Archilli, one of the men who introduced the concept of list making to her, explained that, "Evil intentions start in the mind. So that's where they need to be stopped."
Certainly no one would have suspected that such an ugly list would have come from the likes of Pamma. Outwardly, she was the image of ideal, exotic beauty: bronze skin, big eyes, long hair, and healthy body all wrapped up in youthful sweetness. Yet inwardly, as her list revealed, she was a woman that had lost her way, and in need of much help. Her cute laugh and honey-like voice couldn't hide her corrupted character anymore.
That was the whole point of writing the list: to peer beyond the outward appearance and see what was really going on inside. Pamma penned her list willingly at the prompting of Archilli, an Earth man, and Pamma's old boyfriend, Geo. Like Pamma, Geo was a native of Planet Pizon. Ironically, he had recently returned to Pizon with his new friend, Archilli, the very week that Pamma's boyfriend, Oraxo, had gone on a trip. Pamma at first thought it was coincidental that Geo came back to Planet Pizon while her current boyfriend was offworld on his scientific quest for rare power generating minerals. However, through the events of the past few weeks, Pamma no longer believed in coincidence.
While her boyfriend was gone, Archilli and Geo, behaving as perfect gentlemen, had been a great help to Pamma. Both of these men had previously made lists of their own and had benefited from them immeasurably. Pamma could testify firsthand how much of a changed man Geo had become. If Geo could change, Pamma figured that anyone could change--including her.
Of course, she couldn't say firsthand how much Archilli had changed, since she had only recently met him. Yet in that brief span of a few weeks, Pamma always felt completely safe with Archilli. He was just old enough to be her father, and despite his being a little on the quiet side, Pamma saw Archilli as a natural leader with integrity. He was a man who demonstrated extreme loyalty to his beliefs and his friends. Pamma was now counted among that small number, and it made her feel honored.
Navigating through the busy spaceport terminal, Pamma was pretty sure that her current boyfriend, Oraxo, whom she was waiting for, would not approve of these new relationships. Yet none of that would matter soon anyway. At least Pamma didn't think it would matter much longer.