CryptoArt Shrugged: What To Do During Rare Digital Art Technical Difficulties 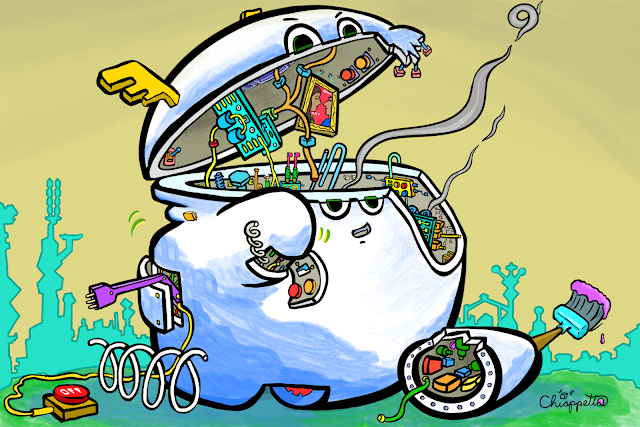 What To Do During Rare Digital Art Technical Difficulties

Imagine for a moment this scenario. The most amazing art the world may ever see has just been finished, and you're its proud creator. Anxious to release your work for sale as rare digital art, you head over to your favorite online art market to launch the artwork to the public... yet... something's wrong! The marketplace is supposed to be live but it's temporarily delayed. Or other unexpected technical difficulties--with your entire preferred blockchain--make it impossible to immediately release such precious art.

Would this now be the time to...
(a) Panic?
(b) Complain?
(c) Keep clicking buttons until your will be done?
(d) Leave this sketchy, experimental field forever?

The answer--probably--is actually (e), none of the above.

Therefore what should creators do when their preferred rare digital art gallery--in which they desperately want to release new artworks on--is having downtime or is delayed? The short answer is... something else. As with most things highly technical, new, and still evolving, proper development for mass consumption takes time and frequent revision. Rome was not built in a day.

Remember also some related facts of development.
With these things in mind, the "urgent" feeling of disappointment or even frustration when delays bump through new technologies are--in most cases--not cause for alarm at all. It's all relative, and just a normal part of the development process. In other words, that's life; shrug it off.

Nevertheless, there is a way to make the most of such delays. Below are some useful professional actions that any artist can take when there are technical delays in publishing art through a preferred rare digital art market.

As anyone can imagine, the list of useful, professional, and forward-moving tasks that can be done during unexpected delays are quite involved and productive, in-and-of themselves. More could easily be added to this list as well. Those in the crypto-art field long enough know too well that a strategy to manage blockchain delays is simply a good thing to have. Therefore the prudent will pass the "downtime" wisely, turning it into "uptime." And soon--yet never soon enough in the moment--that preferred site that had you in such a bother due to delays will be up and running--and so will you--already.