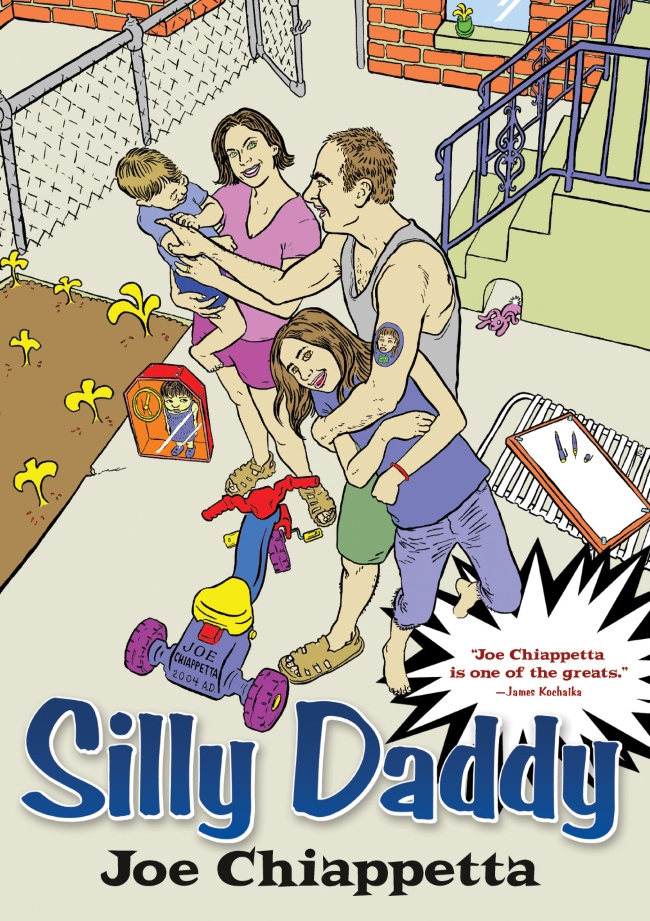 This epic story is the Family Circus of independent autobiographical comics. Imagine Van Gogh with a wife and kid today: that's Silly Daddy. Parenting has rarely been more profound. Joe Chiappetta's autobiographical search for the meaning of life turns up surreal truths and belly laughs. He's an untamed artist, a devoted father, and a confused husband. They take MasterCard, not masterpieces at the grocery store: an economic reality that sends him reeling. If you've ever felt like flunking out of the middle class and family time is running out, this book is for you. Fourteen years in the making, Silly Daddy is the true life story that captures the struggles and victories of what it means to give life your all and come up short. Illinois cartoonist Joe Chiappetta turns autobiographical storytelling into a family odyssey of road trips, break-ups, romance, sci-fi adventure, big laughs, deep thoughts, and redemption.

Originally serialized and nominated for four awards, the Silly Daddy independent comic book series gathered international acclaim and a Xeric Award. This 254 page book contains a never before published ending and follows his daughter Maria from birth through age twelve. These father/daughter adventures throughout the years are whimsical and wacky, heartbreaking and hilarious. See Silly Daddy have conflicts with the cops, battle cars from his bicycle, almost die in a mountain climb, offend meat eaters, bureaucrats, big shot comic book distributors, and even his own family, all with relative ease. The cast of supporting characters ranges from out-of-this-world heroes (Psycho Child), to love interests who are so real you think you already know them.
This is a backstage pass to marriage, divorce, the singles scene, the artist scene, and that all important scene that a man should never be cut from: the fatherhood scene.

"From the original Silly Daddy comic book series that began in 1991, what issues are compiled in the 2004 Silly Daddy graphic novel?


The Silly Daddy graphic novel reads like a novel. It's a huge family epic with the underlying theme of rebellion/redemption.


"Are the previously published pages in the new Silly Daddy graphic novel reprinted as is?"


No. Most of the previously published pages in the Silly Daddy graphic novel have been revised by Joe Chiappetta to tighten the continuity of this 13 year project. In fact, many of the original art pages challenge the very fabric of White-Out. Another noteworthy change is that one of the original Silly Daddy issues (#11) was drawn in shaded pencil only, but was originally printed in a way that did not capture this shaded artistic detail. In this 2004 edition, the fully shaded details will be reproduced with higher quality printing to reveal aspects of the story never before seen outside of the family basement art studio.


Silly Daddy has been described as everything from "Autobiographical non-fiction" (Calvin Reed, Publisher's Weekly), to "Crude, but amazing" (Dave Sim, Cerebus).

Sub-themes in Silly Daddy graphic novel include:
- Parenting Without a Net
- I Was A Former Vegetarian
- Left-Handed Italian Artists Are Supposed To Be Great
- The Independent Comics Scene At The End Of The 20th Century
- What Art Schools Don’t Want You To Know
- A Funny Thing Happened on the Road to Redemption


Top 10 Reasons Why Silly Daddy & Other Comics Are Worth

1) Quentin Tarantino's mother has read Silly Daddy and collects his artwork. Silly Daddy has all the elements for a great movie.

2) Silly Daddy appeals to a wide audience. Most people have parents, or are parents. Half of all marriages end in divorce similar to Silly Daddy's chronicling. The book includes elements that appeal to anarchists, Christians, artists, sci-fi fans and suburban housewives.

3) Silly Daddy fits with current media trends. Reality TV is still the rage, and the art as well as autobio story of the book give the reader the feeling that he/she is watching the illustrated scenes from a "hidden camera" stationed in Joe's life.

4) In an election year, and with more implementation of heightened homeland security as well as talk of a national ID card, The "A Death in the Family" sequence illustrates and plays to Americans' worst fears of loss of privacy and freedom.

5) Silly Daddy addresses the causes and effects of the important societal concerns of unplanned parenthood, child abuse, divorce, and their effect on the individual as well as society at large, but in a palatable, entertaining way.

6) Joe's life story makes for a naturally interesting interview. What could be more captivating than Howard Stern talking to an eccentric artist who is a former rebel, and current born again Christian with a day job working to help adults with mental disabilities find jobs.

7) The books are full of local color which will easily appeal to Chicagoans and urban folks.

8) Joe's current day job requires him to pitch an idea to roomfuls of people on a regular basis and even make occasional TV appearances describing the employment of people with disabilities. Chiappetta's appeal is that of a regular American working class guy that God has put in a remarkable place.

9) Public attention has recently been caught by the book The Starter Marriage. Silly Daddy gives a bird's eye view into the Gen X phenomena. The success of My Big Fat Greek Wedding demonstrated Americans interest in entertaining ethnic anecdotes. Silly Daddy boasts several funny Italian-American experiences and characters. Mel Gibson's The Passion of the Christ has brought renewed attention to the debate over Christianity, a theme consistent in Silly Daddy and 's other comic books.

10) They're already studying Joe in college! Silly Daddy was the topic of a PhD candidate's paper and presentation at a conference on Arts and Culture in . Also as one of the pioneers of the Independent Comics Movement of the 1990s, Chiappetta's work has a lasting place in comics history.
Labels: Chiappetta, comic book store, family, funny, graphic novel, love, marriage, parenting, publicity, silly daddy, social commentary, store, surreal
Newer Post Home